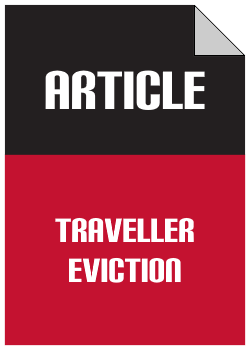 A landowner in Reading had arrived at work on Monday morning to find 18 caravans parked in the company car park of his kitchen showroom. They had totally filled the car park and grass verges with their vehicles leaving no space for his employees and customers to park. There were bags of rubbish littered everywhere.

He approached one of the people who was outside, and the man told him that they were staying for a week, and if he wanted them to move any sooner they wanted £400 for each caravan.

The landlord contacted his solicitor on what the best course of action would be. The solicitor recommended that he obtained a County Court Order to evict the travellers, and then proceed to obtain a High Court Writ. The solicitor told him about the legal fees and the time-scale this would take. The landlord asked him to wait and he would call him back.

The landlord found Quality Bailiffs on the internet and read about how to remove travellers from your land, and looked at our video guide.

The landlord asked about the Common Law option as the trespassers were threatening his staff if they did not let them use the toilets or give them access to water. He also told us that even though his staff had parked in a neighbouring car park, his customers just drove past and they would not enter his showroom. He was losing business.

We explained to him about evicting the trespassers through Common Law and how fast, simple and efficient it is.

Within minutes of him completing the Quality Bailiffs instruction form and attaching all relevant documents required, we started the procedure to carry out the removal of the trespassers from the landlord car park.

The landlord told our Reading bailiffs that it was not the first time this particular group of trespassers had parked on his land. They were on his land 2 months earlier, but they left after he gave them £200 each to leave. We explained to him that this was a mistake as in the experience of Quality Bailiffs Reading staff the trespassers will just see him as a regular income source if they return to his land every couple of months.

Quality Bailiffs Reading staff attended the site later that day and carried out a full risk assessment, and gave the travellers notice to remove themselves from the land. The Reading bailiff then left the site returning to the office to complete the risk assessment and forward to the landlord with the costing for carrying out the eviction the following day.

Quality Bailiffs Reading staff arranged with the landlord for bailiffs to attend the address the following morning at 8.00am to carry out the eviction. 8.00am was the best time to attend because if it was left any later in the day that in Quality Bailiffs experience the men of the group would have left the site and there would be no vehicles to tow the caravans away to a different site.

The Reading Bailiffs attended the site the next morning as arranged. They were met with a hostile response from the men on site. They wanted to know why the landlord had instructed Quality Bailiffs Reading bailiffs to evict them as the last time he just paid them to leave the site. The bailiff that was leading the operation for Quality Bailiffs told the man that they would not be receiving any payment on this occasion or any other occasion in the future and asked that they left the site peacefully within the hour.

A few minutes after the first contact from Quality Bailiffs Reading bailiffs two travellers left the site in different vehicles. Our Bailiffs then approached a different man who had just came out of one of the other caravans and started to discuss the situation with him to see what his attitude towards the situation was. He told the Reading bailiffs that he had no say in the matter, and the man that we had already spoke to was in charge of the group and they all do what he tells them to.

The Reading bailiffs spoke to the lead man on the other man’s mobile phone. He said that they were out looking for somewhere suitable to move to but were struggling to find anywhere. He told the Reading bailiffs that due to the amount of rain recently they needed hard standing ground.

The man returned to the site around 40 minutes later and said that he had located a suitable site and that if we didn’t contact the police he would be packed up and ready to leave in under an hour. The Bailiffs checked with the landlord and told the landlord that in their experience they would string it out for an extra 10 to 15 minutes over that but it was the best option as it would save him the cost of a removal vehicle and would be quicker that towing the caravans from the site. The landlord confirmed with the Bailiffs that he agreed, and the time was given to the trespassers to leave the site.

The travellers left the site at around 11.15am leaving a mess behind as they normally do. The situation was resolved in less that 24 hours of the client instructing us compared to the 1 week plus that it would have taken through the courts. The client thanked Quality Bailiffs for the speed in which the job was completed and also told us the cost for the job was around half the price that the solicitor had quoted.

If you need Traveller Eviction in Reading then contact Quality Bailiffs.